I know that I haven’t been blogging as much lately as I had been. The sumer has been moving along fast and I’ve been struggling to keep up. However I did find time to read a new collection of plays by Crystal Smith-Connelly. 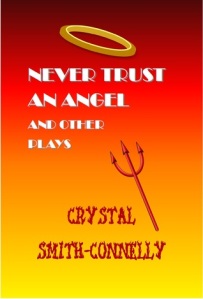 Never Trust An Angel and Other Plays is the latest anthology of short plays from Crystal Smith-Connelly. Smith-Connelly is a talented playwright whose previous work, For I Am Zeus, I really enjoyed. This collection is a little harder for me to judge because I don’t necessarily fit into her target audience with this one.

This collection of plays reexamines and looks to rediscover the God of the Bible and look at him, his Son, his enemy, and his followers in a humorous light. As a person of faith and a humorist, I was intrigued by this idea. And for the most part it worked. I wasn’t as impressed by the overall work as I was by her previous work, simply because it seems to me at times the character of God comes across as Zeus from her previous work. I would have liked to have seen a little different character development there. However the characters of Jesus and Satan are well defined and make up for God. If the collection had focused more on these characters and less on the God/Zeus hybrid, I think I would have enjoyed this work a lot more and would have given it a higher rating.

Yes the play could be argued as being “sacrilegious” but I believe that God isn’t just the creator of the world, but the creator of comedy and at times, we need to poke a little fun at ourselves. In one short play, Messiah Island, is a great look at two different kinds of people who are competing for the role of Messiah via reality television; the hyper-religious and the doing it for the fame. In my opinion, this is the strongest play out of the bunch because it deals directly with God and his followers, something I would have liked to have seen more from.

Overall, this is a strong work and one I would imagine works very well on the stage, I just wish that Smith-Connelly would have branched out a little more in her characterization of God and made him less Zeus like and Zeus-lite.

Never Trust An Angel And Other Plays is now available for purchase through Amazon as a paper-bound book or a Kindle edition.

For more information on Crystal Smith-Connelly, you can check out her Facebook page or her webpage.

For I Am Zeus is a collection of 6 short plays in one collection by playwright Crystal Smith-Connelly that presents a humorous look at the amorous adventures of the Greek god Zeus and his sexual conquests.

I’m a big fan of ancient Greek comedy with their base and ribald jokes and social messages. Smith-Connelly seems to be influenced by them as well. These plays, while chock fill of jokes, looks at things like the bar scene, speed dating, marriage counseling, reality show television, and religion in general. Her writing suggests a familiarity with the original source material while maintaining her own unique voice and vision. And while some of the jokes are “dated”, they work because they are coming out of the mouth of a clueless braggart like Zeus.

I did notice some formatting problems, particularly in the latter plays in the collection. They weren’t major (extra spaces, extra return key strokes, a missing return key stroke) but I feel that I would be remiss not to mention them, but they didn’t take away from my enjoyment of Smith-Connelly’s plays. I will also mention that in one of the character descriptions, Zeus was mentioned as being in his 60s when in the previous ones he is mentioned as being in his 50s. Again, minor stuff here. I would have also liked a table of contents that linked me to each individual play so that I could reread certain ones again without have to page through the whole thing.

This is a piece I would love to see performed on stage sometime and I thoroughly enjoyed reading. It is a quick read and worth the hour or so it takes to read.

For I Am Zeus can be purchased at Amazon, Createspace, Barnes & Noble, or Books-A-Million.

Everett Robert is an award winning author, playwright, actor, and director with over 20 years of experience. He is the author of "Allie In Wonderland" (published by Heartland Play Publishers) among other plays for children and young adults.